The Fraternal Order of the Golden Owl is international. We have knights from England, Scotland, Wales, France, Italy, Switzerland, Sweden, Mexico, and all over the United States. It is private. We are a group of normal people trying to live to a higher ideal. We are not claiming to be royal, non-ruling monarchs, princes, noble dukes, clergy, tribal kings, or anything other that who we are. We are a fraternal order. This means we are a group of individuals (men and women) dedicated to a specific goal. We are an Order of Chivalry in that we use learning and living an idealized chivalric lifestyle as our goal. We do this to make the world around us a little better and perhaps inspire others to do the same.

As of August 2021, we have 54 knights and dames from around the world and we continue to grow wildly. The golden owl symbolizes wisdom, its wings open symbolizes the spreading of our ideals, the chevron on its chest symbolizes achieving higher goals. The green spheres in its talons represent the balancing of the two worlds; physical and spiritual.

The Fraternal Order of the Golden Owl exists to make the world a better place, one adventure at a time, through learning chivalric concepts, living an honorable and helpful lifestyle as a person of action, and by roll modelling such behaviors.

GOAL OF THE ORDER

The primary goal of the Fraternal Order of the Golden Owl is to “Learn and Live Chivalry.” Candidates learn chivalric concepts through our video platformed Squire Academy, which are designed to create thoughtful reflection and modern, achievable adventures in order to begin to live out an idealized chivalric lifestyle. We have monthly challenges to maintain our mindset and for comradery. This is how the world will change, one adventure at a time.

CREED OF THE ORDER

*Defend the weak *Speak only truth *Make no excuses *Let others believe (as they will) *Hold the temper *Live with honor *Make valorous living a lifelong pursuit.

THE INSIGNIA OF THE ORDER

The Prior was granted heraldic arms, badge, and standard by the authority of Queen Elizabeth II and the hereditary Earl Marshall, and sealed by all three Kings of Arms in the United Kingdom. The Prior chose his own granted para-heraldic badge, “The Belted Owl” and a variant “The Un-Belted Owl” as the symbols for his knighthood fraternity. It is used for his knights, as was the original purpose of a badge, to identify the followers of an armiger. 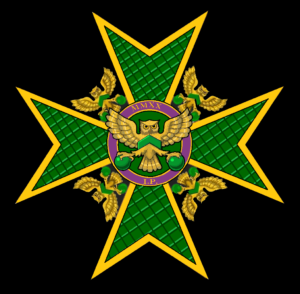 The Badge of the Order is used as a symbol for all knights and used for the Order’s insignia. It is a green Maltese cross bordered in gold, the corners and center are adorned with the owl badge.

THE LEVELS OF MEMBERSHIP WITHIN THE ORDER

There are four levels of membership within the Fraternal Order of the Golden Owl, they are as follows: